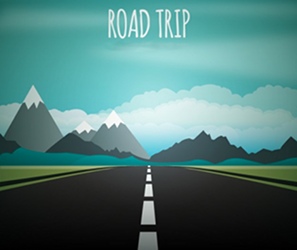 This a preview of my story, Road Trip, which will be published (real soon now). It’s Chapter 1 of an urban fantasy set in 2003 and featuring a former Marine injured in the war in Afghanistan.

Rocco Fitch spotted the beggar on his regular morning walk to get a latte at Emilio’s Coffee Shop. It wasn’t that seeing a beggar in this corner of Florida was unusual. The area was rife with them thanks to the mild year-round climate, the prevalence of tourists, and the cool breeze that came from the ocean in the evening. No, it was the cardboard sign that the man was holding up as Rocco approached that had caught his attention:

Rocco limped to a stop in front of the man, shifting most of his weight to his left leg to relieve the strain on his bad leg, which was already aching from the exertion of the walk. So much for the daily exercise my doctors have been recommending.

The beggar was sitting on the sidewalk in the shade of one of Florida’s ubiquitous palm trees with his legs stretched out before him and his back up against the pastel yellow stucco of the coffee shop. Just above the man’s head, a plate glass window allowed Rocco to see into the shop; Emilio was bustling around behind the counter serving a short queue of customers.

The beggar shook the cardboard sign hopefully, drawing Rocco’s attention back to him. The man was broad-shouldered, with black hair and a long bushy beard that hung down to a respectable paunch. He wore a pair of dark gray work trousers, slightly threadbare at the knees, and a plaid shirt. The man’s attire seemed old-fashioned in some indefinable way that Rocco couldn’t put his finger on, and less grungy than most of the beggars and homeless people Rocco had seen.

He’d also never seen a sign quite like this one before. Curiosity piqued, he asked, “You’re selling a road?”

“Don’t want it no more,” the man said with a thick, Southern drawl, looking up at Rocco with penetrating blue eyes.

“Why would anybody want to buy your road?”

“That’s easy. To get places.” He shook his head sadly, as if Rocco’s question had been the most stupid thing he’d heard in a long time. “To see things they ain’t never seen afore. Maybe even for the adventure of it.”

Rocco bristled a bit at the implied disdain in the man’s response. “If it’s such a great road, why don’t you want it anymore?”

The man sighed heavily. “Mister, I done outlived all my friends, all my family, everybody I ever cared about.” He looked away from Rocco, his gaze fixed on the thin slice of blue ocean just visible down the block. “The road…it can’t give me what I want most in the world. My time is past, and I just want it to be over. It’s past time for me to just fade away like everything else.”

“I feel for you, man.” The man was clearly depressed, but Rocco could sympathize with him. His own life was kind of in shambles, as well. “I’ve been there, too. If it’s any consolation, it does get better.”

He started to walk away, then stopped as a he caught a glimpse of a strikingly pretty, dark-haired young lady, perhaps mid-twenties, in a white dress looking at them through the shop’s window. She’d moved out of sight by the time he’d turned back to fully face the window. He saw that the beggar had partially turned as well, as if to see what he’d been looking at.

Pointing at the window, he asked the beggar, “Did you see a lady in a white dress?”

Rocco laughed. “Maybe so.” The man’s answer was pat and humorous, but somehow evasive as well, as if Rocco had caught him in some sort of lie. “Well, good luck with the sale,” he said, turning away to enter the cool interior of the cafe.

A few minutes later, having secured his usual caffeinated fix from Emilio, Rocco made his way between the small tables holding his hot coffee carefully. The lady in the white dress was nowhere to be seen. He navigated around a baby carriage, complete with a sleeping baby in a blue jumper, which belonged to a twenty-something Latina woman. A little girl, perhaps four years old and as cute as could be, sat next to the woman and stared up at his face as he passed.

He took his usual seat near the window, which provided not only a good tourist-watching vantage point, but also had a good view of the cafe’s large-screen television. Emilio, never a sports fan, was showing Law & Order with subtitles but no sound.

As he sat down, he heard the little girl say loudly, “Mama, how come that man’s face is messed up?”

“Shhhh. It’s not polite to say things like that.”

He’d just taken a tentative sip of his coffee when he heard the patter of footsteps coming his way. The little girl stopped next to his table.

“Mama says it’s not po-lite,” the little girl said breathlessly. “But what happened to your face?”

“Maria!” The girl’s mother said loudly, awkwardly getting up to chase her wayward daughter.

Rocco looked at the girl and smiled. Little kids were a hoot. They’d say anything sometimes because they didn’t have the filters that adults had. But they weren’t judgmental, either, which was always refreshing. Unlike his ex-wife.

“Well, I was in the Marines,” he said. “And we were on a training mission. So we parachuted out of this plane and, well, I drifted over this town because of the wind.” He nodded at the girl’s mother as she arrived. “The highest building in town was a really big church, with a really tall steeple. And I landed right on it. Scraped my face down the entire side of that steeple, just this one side, see? Hurt like the dickens, I’ve got to tell you.

“So, if you ever jump out of an airplane, make sure you don’t land on a church steeple, okay?”

Sure makes a better story than being blown up by a roadside bomb and trapped in a burning, upside-down Hummer.

Stopping beside Maria, her mother said, “I’m so sorry. She’s curious about everything.”

Rocco shrugged. “No worries. She’s a cute kid.” The little girl reminded him of his daughter, Elise, when she was that age. Now she was twelve, living with his ex-wife in Ohio.

The woman smiled and tugged Maria back to their table.

He nursed his latte for a little over an hour, unintentionally caught up in the Law & Order episode that was playing. He wasn’t sure why he was curious about her, but he never did spot the lady in the white dress.

Leaving, Rocco pushed the door open and stepped out into the sunshine, squinting at the brightness as he left the dim interior of Emilio’s. The beggar was still sitting in the same place. Something in his posture, the way he leaned against the building and his tired patience, reminded him of soldiers he’d seen waiting for deployment in crowded airport terminals.

Rocco walked over. “You a veteran?”

“Yeah,” the man said. “Different war, though.” He looked pointedly at Rocco’s right leg and the way that his jeans hung limply around the lower half. “I was lucky, I came out unscathed.”

“No. Further back. I’m a little older than I look.”

Rocco gave him a measuring glance. He didn’t look old enough for Vietnam, but then again, maybe he was.
Acting on impulse, he reached into his pocket and pulled out about a dollar’s worth of change. Holding it out to the man, he said, “Well, I don’t need a road, but I can spare some change to help out a fellow veteran.”

The man shook his head. “Sir, I thank you, but I got money. It’s this road that I need to sell, afore I can do anything else.”

Rocco fished some more loose change out of his pocket, then counted it all. He added two dollar bills from his wallet and held it all out to the man.

He wasn’t even sure why he was doing this, but he said, “Here’s three dollars and thirty-seven cents. It’s all the money I’ve got left in the world.”

“Sir, I accept your kind offer,” the man said, standing up and taking the money from him. He was a few inches shorter than Rocco’s own rangy six feet. He held out his hand and Rocco shook it automatically. He had a firm, confident grasp. “You are now the proud owner of a road.”

The man started walking away.

The man turned, gave him a lopsided grin and said, “Don’t worry. It will find you.”